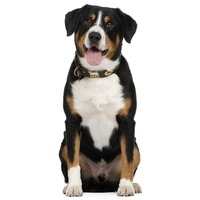 It is the smallest breed of the four Swiss sheepdog breeds, obtained through crossbreeding the local dogs with the Mastiffs brought by the Romans. It spread and developed around Lucerna canton, in Entelbuch County, from where it got its name.

It is a medium-sized dog, with a harmonious build. The head is proportional to the body, with a flat skull and a long and straight muzzle. The eyes are small, dark brown. The ears are placed high, not too big, triangular, round-ended and drooping. The tail is short and carried low. The fur is double-layered with an outer layer made of short, rough, glossy hair, close to the body. It is black with reddish and white patches on the chest, neck, paws, nose and forehead.

It is an intelligent, brave, attentive, jolly, well-balanced dog that is eager to learn. It is very devoted to its master and his family, docile and friendly with children, cautious, even distrustful with strangers. Generally it accepts other household animals and other dogs especially if it was socialized with them.

The fur needs an intense brushing with a special brush to remove the dead hair during the shedding period. As for the rest of the time an occasional brushing with an ordinary brush is enough.

It is a dog resistant to weather changes. It likes life in the open, with a lot of exercise with an active master. It needs socialization and training.

It is an easy to train dog, because it is intelligent and it learns quickly. The training must be firm, consistent, well-ballanced and affectionate. It needs to be socialized from an early age with other animals and other dogs. It likes to always have an activity such as flyball or agility contests.

It is a good watchdog and a jolly and cheerful companion.