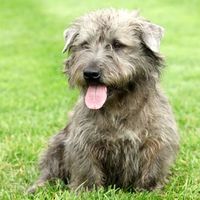 It is a dog that has been raised for hundreds of years in Wieklow county, in Gleen of Imaal city, hence its name. It was recognized by the Irish Kennel Club in 1933. It was used for hunting foxes, pests and badgers.

It is a small-sized, strong dog, long rather than tall. The head is proportional to the body, with a prominent forehead and a muzzle that is shorter than the head and a black nose. The eyes are medium-sized, set apart, round and dark. The ears are small, set apart, folded towards the back at rest and erect or semi-erect when alert. The tail is short, carried high or it can be docked. The fur is double-layered, with a fluffy and soft inner layer and an outer layer made of thick, rich, shaggy, medium length hair. It can be dark grey with lighter stripes, straw-yellow or striped.

It is an intelligent, brave, well-balanced, playful, lively dog that is less irritable than other Terriers. It is affectionate and devoted to its master, it gets along well with children. Strangers are met loudly and cautiously. Some dogs may have the tendency to dominate other dogs, but they don't have problems with other animals if they were socialized with them.

The fur must be trimmed twice a year not to get tangled.

This dog is easily adaptable, it can live both outdoors and indoors. It has a low level of activity and also feels good with a less active master. It needs training and socialization.

It is an easy to train dog, even if it sometimes is stubborn and dominant. The training must be consistent and should be alternated with play.

It is rarely used for hunting and more as a pet.