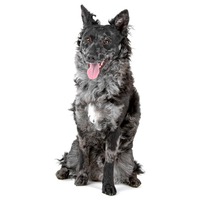 It is a less common breed which appeared at the end of the XIXth century, being a relatively young breed. It was recognized as a breed since 1930 and it is quite rarely met.

It is a medium-sized dog with a slightly long body. The head is long with a cambered skull and a tapered nose. The eyes are egg-shaped, slightly oblique, and dark. The ears are medium-sized, triangular, pointy and erect. The line of the body is slanted towards the tail witch is short and carried down. It can also be docked. The hair is 5-7 cm, can be curled or wavy, and shinny. On the head and legs the hair is shorter and smooth. The fur is black or white or a combination of this two colours.

It is an intelligent dog, very active, obidient, learns with pleasure, brave, attentive and temperate. It isn't very resistant to prelonged physical effort. It is loyal and attached to its family, but especially to one person. It gets along well with other dogs and other animals. It also gets along with children but it is cautious and suspicious with strangers.

They brushing must be done gentle and has to be regularly and frequent to keep the beautiful look of the fur. The brushing should be made more intens during the shedding period.

It is not a pretentious dog and it is pretty resistant to bad weather. It must have the possibility to move, to make exercise and organized activities. It needs socialization traning and exercises.

Not a dificult breed to train, it likes sportive exercises such as flyball and agility.

It is used as a watchdog for animal flocks and houses. Being a brave dog, it is also used in hunting wild boars. It is a good and pleasant companion.