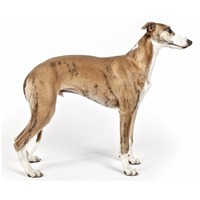 This breed was developed over 100 years ago for racing and mice hunting. It was the result of the cross breeding of the Greyhound with the Fox Terrier, Bull Terrier, Italian Greyhound or even the Pharaoh's Dog.

It's a medium-sized dog of exceptional muscular force, harmonious, symmetrical, galloping with large leaps and able to reach 56km/h on short distances such as running tracks. It has a long, lean head, a flat skull, rather wide between the ears, a long, conical muzzle and a moderat stop with a black nose. The eyes big and dark. The ears are small, placed high,rose-shaped, kept low and pointing backwards when on standby. It has a long muscular neck, the tail is of medium lenght, conical, thin, slightly curved at the tip, work downwards or upwards but no higher than the back. It has a short, fine, dense, of various colours fur, but the most frequent varieties are: white with yellow spots, black, black and white, light blue, reddish mixed with white, black or beige with a dark masc.

It's a lively, courageous, intelligent, jolly, playful, rather stubborn and pretty vigilant dog. It's affectionate, devoted to its master, loving and playful with children, but cautious with strangers. It gets along well with other dogs or the cat or another animal that it grew up with, but we cannot say the same about other small animals running about that it may not be familiar with.

This dog's fur requires and occasional brushing or combing with a special glove to keep its lustre.

It's a dog that can addapt to the conditions offered but it should be kept in mind that it would feel best in an enclosed yard where it can move freely. It like running in the fields, in the forest, but one must remember that its hunting instinct is strong and it should not be left unleashed in public places. It requires socializing and training.

Satisfactory results can be obtained through a ferm, consistent training, on a kind tone, alternating with games and running.

It can perform beatifully in running contests and also is an affectionate companion.