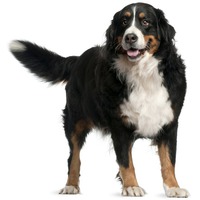 It is one of the four breeds of Swiss shepherd dogs obtained through crossbreeding the local dogs with the Mastiffs brought by the Romans. It was developed in the Canton of Bern from where it gets its name.

It is a large-sized dog, with a strong, well-balanced and harmonious body that gives it an imposing look. The head is wide and proportional to the body. It has a powerful and straight muzzle. The eyes are small, almond-shaped and dark. The ears are medium-sized, triangular, with rounded tips and drooping. The tail is long, bushy, kept low, never on the back. The fur is double layered, with a long, soft, glossy, slightly wavy or straight outer layer that can be black with rusty spots on the eyes, on the jaws, on the legs and forehead, nose, chest, paws and the tip of the tail.

It is a brave, intelligent, active, lively, alert, watchful, calm dog. It rarely barks. It is devoted and loving with its master and his family. It is protective and loving with children. If socialized from an early age with other dogs and other household animals, there won't be any problems. Strangers are intensely barked at and then supervised, the dog being ready to protect its master if necessary.

It needs regular brushing to avoid the hair from getting tangled. During the shedding period it should be brushed more often.

It is a dog resistant to weather changes. It likes to live outdoors in a wide open space were it can move freely, with an active master. It loves exercise even though it has a medium level of activity. It must not be forced to make a lot of physical effort during the growing period. It needs activity, training and socialization.

It is an easy to train dog because it is intelligent and responsive. The training must be well-balanced, consistent, firm without being severe or rough. It is sensitive to the tone of the voice and easily understands what is asked of it. It likes to run and play.

It was used in the past as a watchdog, for herding animals, for hauling and for hunting. Today it is used as a good watchdog and also as a pleasant companion.