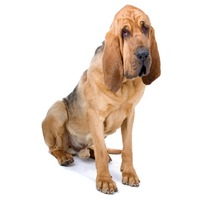 It's a very old breed that descends from the Tibetan Mollos, brought to Gaul and England by Roman legions. Later it was developed in a monastery in Arduinna, thanks to the missionary Saint Hubert, hence the name, where it preserved its purity for a couple of centuries. It was very appreciated at royal courts and for pack hunting.

It's a large-sized, strong, brawny dog, with thin skin, drooping from its forehead, cheeks and neck. The head is long, the skull is high and pointed, the muzzle is long, with a big nose and big lips. The eyes are deeply set and dark. The ears are placed low, very long, hanging in folds by the jaws. The tail is long, conical, carried high, slightly bent, but not on the back. The fur has short, thick, rather rough hair on the entire body, but soft and silky on the head and ears. The most frequent colours are black and fawn, fawn and red and pure red. It can or not have white patches on the chest, paws or tail.

It is an intelligent, serious, active, gentle, friendly dog, persistent especially when tracking its wounded prey, following the blood trail, hence the name of Bloodhound; it doesn't bark much, but it barks loudly. They have a keen sense of smell, they are lively, well-balanced, but stubborn and independent. It is very patient with children, devoted and attached to its master. It has no problem with strangers, other dogs or other animals.

The fur must be occasionally brushed to remove dead hair. The ears must be cleaned regularly not to get infected because of dust or dirt. The same goes for the folds on its face.

It's a dog resistant to weather changes that feels best outdoors, in a fenced yard where it can move freely. It is a dog which grows fast and must not to be forced to take long walks before complete development. It has a high level of activity and it is recommended to active people.

It is a rather stubborn and independent dog, therefore it's hard to train. The person in charge of the training must have experience, to be patient and consistent. The dog must be taught from an early age to come when called, not to run off by itself, this being a habit when it catches the scent of prey.

It is an excellent hunting dog. It is used by the police for tracking and it is a lovely and devoted companion. 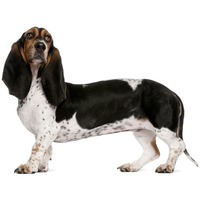 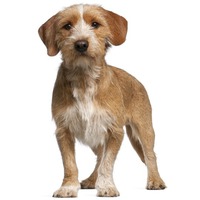 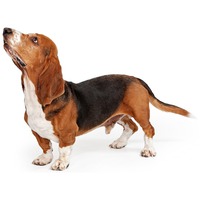 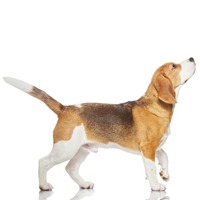