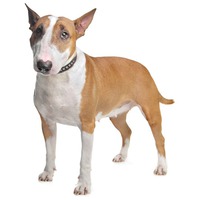 When bull-baiting was banned in 1835, man sought to obtain a breed good at fighting with other dogs. That's how the Bull Terrier was created by crossbreeding the Bulldog with several breeds of Terrier (Black and Tan, Fox Terrier) and Dalmatians. Later, miniature Bull Terriers were created, which have the same features but they are 10 cm smaller and are considered an independent breed.

It is a medium-sized, brawny, powerful, strong and agile dog. The egg-shaped head is specific for this breed, being long and a slightly vurved from the forehead to the nose. The eyes are slanting, small, and dark. The ears are small, thin, close together and straight. The tail is short, conical and kept horizontally. It has a strong neck and a brawny, broad chest. The coat is short, straight, flat, thick, rough and glossy. The colour of the fur can be: pure white, with patches on the head or any other color without white patches.

This dog is primarily hard on itself (withstands great pain), very brave and bold (it is not afraid of anything and doesn’t run away no matter what), lively, noisy, cheerful, even angry, stubborn and with an independent thinking. If it hasn't been well socialized, it can be possessive with its food and toys and it may react aggressively when it provoked. Loving with children, it accepts them with pleasure especially if it was socialized from an early age. Generally they are friendly with people, but can engage in bloody conflicts with other dogs. It all depends on the specimen’s nature and the way it was taught, socialized and trained. It is faithful to its master and gets along with other animals.

The coat doesn’t require much care. An occasional combing and brushing will do.

This dog can adapt to any offered conditions. It is recommended only to people with experience in raising dogs, active, that can take time daily for the dog, to be patient and loving. It needs a special, soft place where it can sleep. It should avoid strong sun.

The training of the dog should begin at an early age and done by a person with experience. If it is not trained properly, when it grows up, it will be hard to control. It is an intelligent dog which learns quickly, but because it is stubborn with an independent thinking, the training must be firm, done with patience and consistency, it must be taught to respond quickly to commands. The socialization with people, other animals and other dogs must be done carefully from an early age.

It was created for dog fights but today it is used as a watchdog and as a companion.