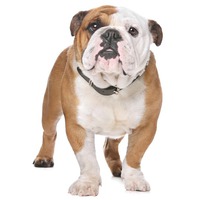 It is a well known and beloved breed in England, descending from the ancient Asiatic Mastiff. The first time the Bulldog was mentioned was in 1209 in the description of a fight between the butcher's dogs and a bull. Bloody fights between bulldogs and other animals (bulls, bears, and orangutans) were allowed in England until 1835. Even though these dogs have been less in demand, still, the fans of this breed have perpetuated it, saving its strength and bravery, but eliminating its aggressiveness, undesirable habits and emphasizing its gentle character and distinct look.

It is a medium-sized, brawny dog, with a heavy, stocky body, sustained by short, powerful legs. It has a brawny, wide and square head, with a short, flat skull and wrinkled forehead with prominent eyebrows. The muzzle is short, wide and compressed, with a prominent lower jaw, a snub nose and thick, hanging lips. The eyes are deeply set, apart, round and medium-sized. The ears are wide apart, small, drooping and with a visible portion of the inner part of the pavilion. The neck is short, thick, and the chest is wide and deep. The fur is short and soft, sleek and shiny, close to the body and can be beige, reddish-brown, striped (with or without a black face), white and spotted.

Tis dog's fur doesn't require too much grooming. A brushing to remove dead hairs during the shedding period is enough. The folds on the face should be cleaned from time to time. Unfortunately, this breed suffers from frequent congenital ilnesses of the heart and spine. They have a tendency towards snoring and excessive drooling and also to chronic flatulence. It is not recommended to let it be exposed to strong sunlight being prone to sunstroke.

It is a breed very well adapted to living in a flat. With a low level of activity, it is happy with short, daily walks and for the rest of the time it loves to stay with the family. This dog is recommended to less active people. It needs training and socialization.

It is an easy dog to train. It is recommended that the training be done on a gentle, friendly, but firm tone, without being severe. It must be consistent and well-balanced.

It is a good watchdog and a companion dog.