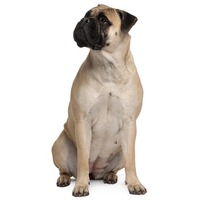 It is the result of the crossbreeding between a Bulldog and a Mastiff and was created in the 19th century to catch and capture poachers without hurting them.

It is a large-sized, strong, harmoniously built, brawny dog, which gives the impression of great force. The head is big, square, with a flat forehead, with a prominent and strong lower jaw, a short and blunt muzzle. The eyes are medium-sized, hazel. The ears are medium-sized, V-shaped, placed high and drooping. The tail is wide at the base, pointed at the tip, reaching the paws and straight. The fur has  short, thick, smooth and rough hair; it can be copper-red, all shades of brick, with black nose and ears. It can have a small white patch on the chest.

It is a strong dog, fast in movements, with all its massiveness, watchful, gentle, quiet, docile dog but sometimes stubborn. Tolerant and patient with children, devoted to its master, it accepts strangers only with its master's permission. Adequately socialized from an early age, it will get along well with other household animals, but it is dominant towards other dogs.

An occasional brushing, a more frequent one during the shedding period is enough.

It feels good in the open, but it can adapt to a flat if it is accepted by the family because it is a rather large dog. Even though it has a relatively low level of activity it must have the chance to play and walk daily. It needs socialization and training.

It is an easy dog to train, being sensitive to the tone of the voice. Even though it is docile, the training must be firm, well-balanced and consistent. Being strong, it needs to be taught to walk in a leash without pulling. It is not recommended to be kept in a leash by children.

It is a good watchdog and guard-dog and can be used by the police or the army. It is a devoted and pleasant companion.