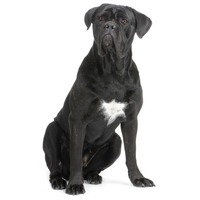 It is one of the oldest breeds in the world. The descendant of this great breed is the Roman MolossusIt - Canis Pugnax. It was used for hunting because, although it is a big dog, it's not at all heavy and can hunt large-sized animals. After War World II, they were almost extinct, but the fans of this breed managed to revitalize it. Now it is used as a guard dog for houses and flocks.

It is a large-sized, massive, vigorous, well built dog, with a strong, brawny body. It is longer rather than taller, with a wide head and a short muzzle with a black nose and powerful jaws. The upper lip is shaped like an inverted V. The eyes are medium-sized, apart and dark. The ears are medium-sized, v-shaped, and naturally kept forward or can be cropped to stay erect. It has a thick tail, which can be docked 1/3 of its length. Its skin is not wrinkled and the fur is short, rough and glossy. It can be black, grey, fawn or striped fawn and grey. It can have a small spot on the chest or legs.

It's a well-balanced, intelligent dog, that is very affectionate and loyal to its family. It has a strong and dominant personality and that's why it's cautious with strangers and can become aggressive, but if it is socialized from an early age, such situations can be avoided. Also, it must get accustomed to other household animals from an early age, so it will accept them later.

The coat is easy to groom. A casual brushing with a rubber glove is enough. The ears must be kept clean, being the most sensitive area and also the mouth should be kept clean, because these dogs are prone to excessive drooling.

It is a dog with a moderate level of activity and sensitive to the cold (being a breed from the south of Italy). It can adapt to apartment life and also to outdoor life. It needs daily exercise, it likes to run, to take long walks in open air, but once it comes back home, it will stay calm. Requires a leash, training and socialization.

This dog is easy to train because it is intelligent and wants to please its master. The training and socialization must be done at an early age, otherwise this dog can become aggressive. But with a consistent training, it can become a gentle and protective dog.

It is a very good guard dog and due to its very well-developed sense of smell it is also used by the police.