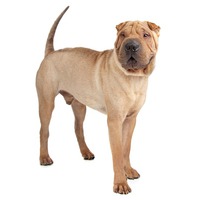 It is an ancient breed created in the South of China. It is believed that it was developed as a dog that's good at everything, but especially at fighting. Statues and manuscripts from different periods refer to a wrinkled dog similar to the Shar Pei. It was at one point endangered, but due to a fan from Hong Kong, it was saved, becoming today a known companion dog.

It is a large-sized dog with a strong, square body. The main feature of this dog is the wrinkled skin on the head and body that has many folds, as well as its blue tongue. It has a big head with a broad, flat muzzle, named also ,,hippopotamus'' muzzle. It has a big and black nose. The eyes are small, almond-shaped and deeply set. The ears are small, set high, spaced and drooping. It has a tapered tail bent on the back. The fur is very rough (the name Shar-Pei actually meaning "sand skin") and there are 2 varieties: the one with short hair or ,,horse-hair'' and another one with longer hair but no more than 2,5 cm. The first variety is the more often met. The colours can be black, brown, fawn, red or cream. Lighter areas are allowed, but never white.

It is a brave, fearless, intelligent, pretty vigilant dog. It is devoted to its master and his family. It gets along well with children, but is cautious and suspicious of strangers. Socialized from an early age with other animals, it will have no problems with them later on, but it is dominant with other dogs.

The wrinkles on the body and head must be cleaned regularly to avoid getting infected. If it is necessary, they could be brushed with a soft brush.

This dog feels better in the open, with the possibility to move freely with an active master, but it can also adapt in a flat having a medium level of activity, if enough exercise is provided in order for it to keep calm indoors. It needs socialization and training.

The training of this dog must be done by an experienced, determined person , who doesn't show signs of weakness and hesitation, because the dog will reveal its innate instinct of domination. The training must be firm and consistent and done from an early age. It needs daily exercise, to avoid having problems in the house.

Today it is used as a watchdog and as a companion dog.