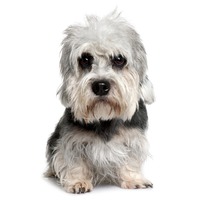 It is an old Scottish breed, registered for the first time in 1700 and becoming known thanks to Walter Scott, whose main hero in the novel Guy Mannering, Dandie Dinmont, was surrounded by six such dogs. It is assumed to descend from the crossbreeding between local Terriers and Dachshund.

It's a small-sized dog, with a long, well developed, brawny and flexible body. The head is large, wide, conical towards the nose, with a prominent stop and the muzzle slightly longer than the skull. The eyes are big, round, apart and dark brown. The ears are long, placed low, drooping, with longer hair on the tips and of the same colours as the lock on the head. It's entire head and muzzle is covered with long hair. The tail is shaped as a medium-sized scimitar, kept high when alert and low at rest. The fur is double-layered with a fluffy and soft inner layer and an outer layer with rougher hair on the back and softer on the lower side of the body. Its colours can be "pepper" (which varies from black to silver-light gray) and "mustard" (a reddish-brown to pale-beige).

It is a brave, restless, bold, cheerful but calm, well balanced, alert and sensitive dog. Loving and loyal to its master and family, it is cautious with strangers. It is loving and cheerful with children, it accepts other animals and other dogs if it has been socialized from an early age.

This dog's fur must be brushed regularly and trimmed once or twice a year.

It is a dog that adapts easily to the offered living conditions: indoors or outdoors. It has a middle level of activity and will adapt to all circumstances. It needs training and socialization.

It is an easy to train dog, but one mustn't forget that it can sometimes be stubborn. Therefore the training must be firm, consistent without being severe or rough.

It's a very good small animal hunter such as rabbits. It's a good companion.