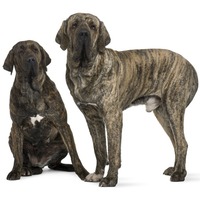 This breed is considered to be the result of the crossbreeding between the Bloodhound, Mastiff and English Bulldog and was created by the Spanish conquistadors to catch escaped slaves.

It is a large-sized, long rather than tall, vigorous dog. It has a massive head, with a big, strong muzzle and a black and wide nose. The lips are thick and hanging. The eyes are medium sized, almond-shaped, and bright yellow to dark brown. The ears are V-shaped, big, drooping. The neck is strong, and the tail is wide at the base and pointy at the tip. The fur has short, close to the body, straight hair and can have any colour except white, it can be brindle with white patches on the chest, neck, tail and on the paws.

It is a brave, active, intelligent, rather aggressive dog, with a well-developed sense of smell and with strong territorial instincts. It is devoted and obedient to its master, faithful, tolerant with the family, including children. It is distrustful and cautious with guests and doubtful and even aggressive with strangers. It only accepts the animals it was socialized with from an early age; the new ones will not be accepted. It is considered a dangerous dog.

This dog doesn't require too much grooming. An occassional and more intense brushing during the shedding period is enough.

It is recommended to be raised only by a person with a lot of experience in raising animals, in a well-fenced yard where it can move freely. It needs mandatory training and socialization.

It must be trained by a person with a lot of experience, who knows how to make the dog understand who the master is. Being a dog with a difficult character, the training must be firm, without being harsh, done with calm and patience because it is sensitive to the tone of the voice. It is a dog that responds fast and has aggressive instincts. Nevertheless, if the training is done properly and it has a proper master, it can be devoted and obedient.

It is used as a watchdog for cattle, for hunting large animals, for tracking or as an exellent watchdog for the house.