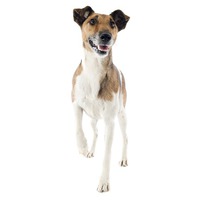 The two Fox Terrier breeds, with straight and wiry hair, were considered the same breed until 1984. There is no difference between them, except the hair. Among the ancestors of the 2 breeds, are the black and fawn Terrier, the Bull Terrier, the Greyhound and the Beagle. The breed was officially recognized in 1860, but the Fox Terrier has been represented in hunting paintings ever since the 14th century. The popularity of these 2 breeds declined in the last hundred years because they don't adapt well to city life.

It is a small-sized, square-shaped, well-proportioned, strong dog. The head is shaped as a feather. The skull is flat with a slightly prominent stop. It has a conical muzzle and a black nose. The eyes are small and dark. The ears are V-shaped, small, folded forward, set higher than the superior line of the head. The neck is brawny with a clear outline. The tail is set high, carried up in a cheerful manner, without being dropped on the back, after birth the tail is docked 2/3 of its length. The first breed has straight, rough, short, thick hair, close to the body. In the other breed, the hair is hard, wiry, thick, without being curly, at most wavy. It has tufts around the muzzle and eyes and longer hair on the legs. The colour is white with areas of black and fawn.

It is a very dynamic, tenacious, resistant, brave, intelligent, frisky dog. It is not afraid to attack a larger animal; it is always ready to attack and bite, it barks at the slightest sound and has the tendency to dig. Devoted to its master, it loves children and gets along well with them, but care must be taken around small children, because it is a very lively and frisky dog. It accepts strangers but it will not hesitate to attack in case of danger. It gets along well with other dogs and other animals except the small ones, which will be considered prey, if it didn't know them when it was a pup.

These breeds manage much better outdoors, with a lot of space to move, with an active, athletic master. They adapt with difficulty in a flat.

These dogs are easy to train even though they are stubborn. The training must be firm, consistent, well-balanced, without being harsh or severe.

It is one of the best burrow dogs, nicknamed "the Attila of mice". It tracks and destroys all rodents, foxes and badgers. It has patience to dig even for a whole hour, deeper than one meter in order to find the hidden animal and drive it out. It is used for hunting larger animals like boars, bears, deer, which it attacks with great courage, even with anger. It is a good watchdog and a cheerful and lively companion.