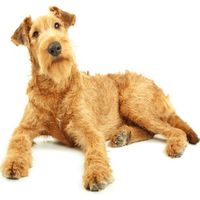 It is a very old, native Irish breed. Its close relative is the wiry Fox Terrier. The dog we know today was obtained through many selections. It was used as a messenger during the First World War. The breed was acknowledged at the beginning of the 20th century.

It is a large-sized, strong, nimble, slender dog. It is the fastest of all Terriers and it shows great strenght. The head is long, flat with a long muzzle and black nose. The eyes are small and dark. The ears are small, V-shaped and half bent above the head line. The tail is docked almost ¾ of its length, well covered with hair, it is kept high but not above the back line. The fur is double-layered with a fluffy, soft inner layer and an outer layer made up of rough, strong, straight, middle-sized hair close to the body. Its beard and whiskers are not very long. The colour can be golden, yellowish, bright red, golden-red with or without white patches on its chest.

This dog is characterized by an outstanding courage and daring that make it dash towards the enemy and fight to death. At home it is nicknamed "Daredevil" (Fearless). It's watchful, intelligent, playful, sensitive, loving, loyal, very protective and faithful to its master. It isn't as hot-tempered as other terriers. It is naturally friendly with people, loving and tolerant with children. It is rather hot-tempered with other dogs. It must be socialized with other household animals from an early age (and taught no to chase cats). Females are generally calmer than males. The dogs of this breed are so attached to the family that they suffer when far from them.

This dog's fur must be trimmed two or three times a year. One must remove excess hair between the footpads.

It is a dog that adapts to the living conditions, whether in an apartment or outdoors. The master should preferably be an active person with experience in raising dogs.

This dog's training should be done by an experienced person because it can be stubborn and moody. The training should be consistent, varied, tactful and ferm without being rough. It needs lots of exercise, enjoying to run and to play with a ball.

It has been used to hunt small animals (rabbits, otters), but it can also  bravely attack larger animals such as wild boars. It is an excellent watchdog and a devoted and loving companion.