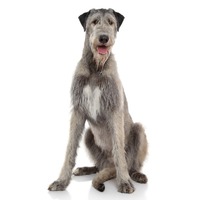 It is considered to be a very old breed. It was identified for the first time in Rome when, in 339 BC, the roman consul Quintus received as a gift 7 specimens of this breed. In Ireland they were brought by the Celts, who were using them to hunt wolves. Oliver Cromwell collected many dogs from this breed and organized big hunts to kill the wolves that invaded England and attacked the population. After wolves became extinct, these dogs were in danger of disappearing. In the 19th century, due to the English captain Graham, who took care of the development and improvement of this breed, powerful specimens were obtained, used to hunt large animals.

It is a large-sized, brawny, sturdy dog but with supple movements. It has a long head, the skull is not too wide with a long, slightly pointed muzzle and a black nose. The eyes are oval, medium-sized and dark. The ears are small, delicate and folded in the shape of a rose. It has a long, brawny, strong neck. The tail is long, slightly bent and of medium thick. The fur is double-layered with a short and fluffy inner layer, and an outer layer that has medium length, thick, rough, pointy, wiry hair that is slightly longer on the head where it forms eyebrows and a bit of beard. The colour of the coat can be grey, red mixed with white and black, reddish, black, light brown and white.

It is an intelligent, brave, dynamic, sensitive, peaceful dog. It is affectionate and very attached to its master and his family, patient with children and pretty friendly with everyone. If it is socialized from an early age, it will have no problems with other dogs and other animals. It barks very little.

This dog's fur must be brushed and combed regularly. Also, once or twice a year it will be trimmed to remove excess hair. During the growing period it should be properly fed and shouldn't be forced to exercise more than it wants. It finalizes its growth at the age of 2 years.

It is a dog which adapts to the offered conditions, but it feels best outdoors in a well-fenced yard where it can move freely. Kept in a house or in a spacious flat (it is a large and tall dog), it needs long and frequent walks, even if they are not daily. It needs socialization and training.

It is a easy dog to train because it is intelligent and easily understands what is required of it. With a gentle, peaceful, friendly, but consistent training, the wanted results can be achieved.

It is used to hunt large wild animals and as a companion dog.