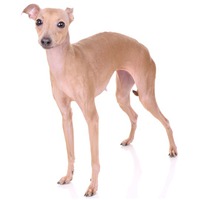 It is the smallest Greyhound and it's and example of selective cross breeding, resulting in a miniature version of a much larger Italian Greyhound. Its origins go way back, proof being a skeleton found in an Egyptian tomb dated as far back as 5000 years B.C. In the Middle Ages this breed was widespread all over Europe especially in the southern part. It became a favourite with the aristocracy and many royal courts such as those of Francisc I, Caterina de Medici, Henri IV, Frederic the Great who had entire packs of these dogs. The breed was represented in paintings by Watteau, Van Eyck, Veronese and others.

It's a small-sized, slender, graceful dog, resembling the Greyhound or the Sloughi, only miniaturized. The body is square shaped, the head is long and lean, with a flat skull, a moderate stop, a conical, long snout with a black nose. Its eyes are big, round and dark brown. The ears are placed high, delicate, small, rose-shaped and bent backwards. The neck is long and thin. The tail is medium-sized, conical, thin with a curved tip and kept low. The fur has short, straight, close to the body and very fine hair. It can have any color, most frequent varieties being: blue, coffee-coloured, red, brown, white, sometimes spotted on the chest and legs. There are spotted varieties, but they are not accepted in all countries.

It's a lively, jolly, agile, active, intelligent, understanding, sometimes stubborn dog. It's devoted and attached to its master, tolerant with children unless they treat it as a toy, but cold and distant with strangers. It's gets along well with other dogs, especially of the same breed and can also get along with other household animals.

This dog's fur does not require much grooming. An occasional brushing will keep the lustre of the coat.

It easily addapts to the conditions offered, either apartament or house. It has a rather low level of activity, but it enjoys running especially in a yard. It feels comfortable with a loving and not so active master. It's sensitive to cold and dampness. In the cold season it's recommended that he is protected with clothes. It need training and socializing.

Though it is rather stubborn, the desired results and can be easily obtained by means of a consistent, ferm but not sever training.

It can be used for hunting small animals, but particularly as a pet.