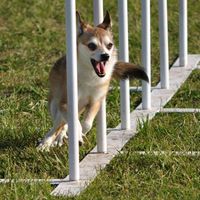 According to a breeder this breed has the particular characteristics of primitive dogs, characteristics that are not found in domestic dogs. It is a very old breed and it was used for hunting penguins, which made their nests on cliffs. A canine typhoid fever in 1940 killed almost every specimen, but with those few remaining dogs and with the effort of this breed's fans, it was revitalized. It is the only domestic dog that:

-can completely fold its ears, not to get dirt in them when it enters rocky crevasses.

-has six toes and eight footpads instead of five toes and seven footpads, like the other dogs have, which gives it a better grip on the rocks.

-has the collarbone like man's, which allows it to stretch its front legs laterally and bend its head backwards.

-has the same kind of jaw as the Varanger dog, whose 5000 years old fossils were discovered in Russia (it has an extra tooth for each side of its upper jaw, compared to the other dogs).

It is a relatively small dog, long rather than tall, with a head proportional to the conical body, with a medium-sized muzzle and a black nose. The eyes are medium-sized, oval and dark. The ears are triangular, pointed, medium to large-sized and erect. The tail is medium-sized, well covered with hair and carried on the back. The fur is double-layered, with a very smooth outer layer made of short, thick hair, red with white, with a mane around the neck and with white areas on the legs, chest, abdomen and face. It can have grey bristles with black tips.

It is a lively, jolly, intelligent, independent dog, sometimes dominant, rather cunning and that rarely barks. It is devoted to its family but cautious around strangers. It gets along well with other dogs but it should be socialized with other household animals from an early age, because its hunting instincts are quite strong.

The fur does not require frequent brushing, except for the shedding period. A canine nutrition specialist should be consulted because this dog lacks an essential digestive enzyme.

It is a dog resistant to weather changes. It feels best in the open, in colder climate with a loving master who can cope financially with the health problems this dog can have. It needs socialization and training.

It must be trained by someone with experience, because it is an independent dog. The training must be firm, consistent and varied in order for the dog not to get bored. It has a medium level of activity and is content with daily walks and playing in the yard.

Today it is used more as a companion or as a watchdog.