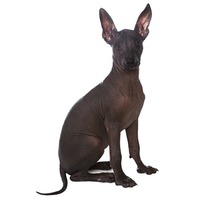 It is believed that this dog has existed for more than three thousand years. It was developed in Maya and Toltec cultures, which considered it the Xolote God's envoy, who led the souls of the dead to their allotted place in the next world. Later on, it was used by the Aztecs as a restorative, because they believed that touching its hide or eating its meat can cure diseases. When the Aztecs were conquered by the Spanish, the breed almost disappeared. At the beginning of the 15 century, the interest in this breed revived. A characteristic of this breed is its constant temperature, of about 40°C. It seems to be a combination between the Terrier and the Greyhound.

It is a dog with a harmonious body, tall rather than long. It has graceful movements. The skull is rather wide, with a long and thin muzzle, small stop and the nose has the same colour as its skin. The eyes are medium-sized, almond-shaped, hazel-coloured, with variations from yellow to dark brown. The ears are big, delicate, batlike, placed laterally and erect when alert. The neck is rather long. The tail is quite long, thin, kept low at rest and high when alert. There is a hairless variety, with patches of fur on the tail and head and a variety with short and soft hair. The skin of the hairless variety can be of different colours: black, grey, dark bronze, grey-black.

It is an intelligent, calm, active, pretty reserved, even shy dog, with a noble character. It doesn't bark, but rather howls. It is very affectionate and devoted to its master, it gets along well with children, but is cautious with strangers. It has no problems with other dogs or other household animals.

The hairless dog's skin must be groomed to keep it soft and hydrated, to avoid it getting dry. One should use lotions and creams. Also, the dog should not be exposed to strong sunlight for too long, to avoid it getting burned. One can use sunscreen. The fur of the other variety should be brushed regularly.

This dog feels the best in a house or in a flat with a loving master. Generally it has a medium level of activity, but if allowed to run about and play regularly it will be very content. It likes to accompany its master everywhere. It needs socialization and training.

It is an intelligent dog, it easily understands what is required of it and that's why it is not hard to train.

It is a good watchdog and a lovely and devoted companion.