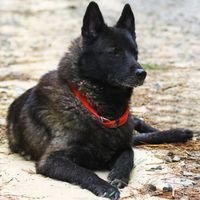 It is a very old breed. This dog's skeleton is like that of the old, stone age dogs from, which shows that this breed has remained the same for thousands of years. It is widespread in Sweden, Norway, reaching England, the U.S.A and Canada at the end of the 19th century. It was the favorite dog of President Eisenhower. It may be the ancestor of today's spitz type dogs. The tail kept on the back distinguishes it from wolves, which hold it between their legs at all times.

It is a medium-sized dog, with a square shape and a stocky and powerful body. The head is broad and slightly rounded with a medium-sized, conical muzzle. The eyes are medium-sized, oval, and dark. The ears are medium-sized, triangular, pointed, erect and very mobile. The tail is slightly curved, carried on its back and covered with thick, long hair. The fur is double-layered with a thick, wolly, beige inner layer and an outer layer made of rough, thick and long hair, which forms a mane around the neck. It has different shades of grey, dark to black behind the ears and around the muzzle. There are varieties with black fur but they are considered an independent breed. In this case they may also have white patches on the chest and paws.

This dog is very brave, intelligent, bold, very strong, lively, but it can be independent and stubborn. Devoted and sensitive with its master, it accepts children, if they don't tease it. It announces the strangers, being reticent with them. It accept other dogs, but sometimes it may be dominant (less often, but it is happening). It must be socialized with other small animals from household to not treat them as a wild game.

This dog's fur requires a more intense brushing during the shedding period.

This dog is resistant to weather changes and feels best in the open, in a colder climate. It can adapt indoors, but it needs daily exercise and running. Care should be taken to prevent it from running away, following a scent. It needs socialization and training.

It must be trained by a person with experience, because it is an independent and stubborn dog. The training must be firm, consistent and well-balanced without being harsh, severe, or involving punishments.

It is still used for hunting large animals, sometimes as a watchdog or as a companion dog.