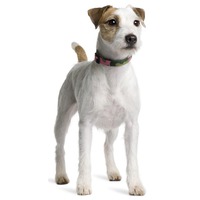 Its name comes from the founder of this breed, the reverebd John Russell, who raised these Terriers for hunting foxes in the second half of the XIX-th century. The dogs from today resemble with the ones raised by John Russell, except they are taller by AKC standards. UKC also recognizes the Russell Terrier, which is a shorter, stockier dog.

It is a small sized dog, strong, brawny. It has a flat head, flattened between the ears, a well-defined stop, the snout has the same length with the skull and a black nose. The eyes are medium sized, almond-shaped and dark. The ears are medium-sized, triangular and feld with the tip and the front. The tail is short, it follows to the line of the back and it is held a little upped. The fur is wiry, bushy, thick and it can be soft or harsh. The colour is mainly white with fawn, yellow, black or tricolour patches, more common on the head and at the bottom of the tail.

It is an intelligent, active, brave (sometimes even reckless), daring, watchful, skilful dog, eager to work. It is a bit unruly and it can easily bite. They like to play with the children. It is devoted to the family. The strangers will be announced. They are usually sociable with other dogs, and when they were socialized since cubs with other animals from the household, they can accept them even if they have sometimes the tendency to chase a cat which is bewaring or running.

The fur is brushed during the shedding period and those with harsh fur will be casual trimmed.

This dog feels better outdoors, with large spaces for exercise and it accommodates quite hard in a flat. It needs much exercise, socialization, training.

This dog is easily to train, because it learns fast, but it must be trained by someone with experience because it has independent tendencies and wants to do anything it wants. The training must be firm, consistent and varied because the dog is full of energy. They are very good at agility and flyball races. It feels the need to run, to fidget daily, to dig.

It is a very good and skilled dog for hunting small animals and a cheerful and frolicsome companion.