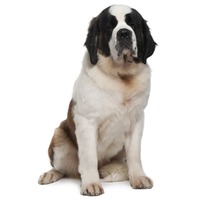 It is one of the best-known breeds, having the Tibetan Mastiff as its ancestor. It was brought to Switzerland by the Romans who used it as a watchdog for properties. Through crossbreedings with dogs from the Alps, the Saint Bernard of today was obtained. In the 17th century it was trained and taught by the monks from the Saint Bernard Shelter (from where it gets its name), to rescue people caught under avalanches. There are records that over 2000 people were saved by these dogs. A dog of this breed, called Barry, saved 40 human lifes in its 12-year life. As a sign of respect, a statue of Barry is exhibited at the Museum of National Science and History in Bern. It's prevalent in Europe and in the USA.

It is a large-sized, strong dog, with a square look, brawny and robust. The head is big, wide, with a short, blunt muzzle, half the size of the skull. The eyes are medium-sized, dark hazel and the skin under its eyes makes wrinkles when alert. The ears are triangular, medium-sized, round-ended and drooping. The tail is long and wide, hanging at rest and with a slightly bent tip. There are two varieties: one with long, slightly wavy hair and the other with shorter and rougher hair. Both varieties have double-layered fur, with thick hair to protect them from the cold. The colour of the hair is: red with white, white with red or white with striped areas, all shades of red in dots. The white areas are always the same: legs, the tip of the tail, chest, the neck covered completely or partially, a patch on the forehead and muzzle.

It is an intelligent dog, with a strong sense of orientation and smell. It is quiet, calm, playful and doesn't bark much. Devoted and affectionate to the family, it is friendly with children and announces strangers with a bark, without being aggressive. It has no problem with other animals or other dogs.

This dog's fur must be brushed daily to remove the dead hair. Its eyes must be regularly checked, because its heavy eyelids makes it prone to ophthalmological diseases. It is a breed which suffers from many congenital diseases. It musn't be kept in heat.

It feels best in the open, but it can also adapt in a flat if it has enough room (it is a large-sized dog). With a medium level of activity, this dog needs daily exercise, long walks and running without a leash. It needs training and socialization.

They must be taught from an early age not to pull when leashed. The training must be done with a calm, well-balanced and loving voice. It must be firm and consistent. Like other large-sized dogs, which grow quickly, they must not be physical stressed in the growing period, to prevent them having bone, muscle or joint problems later on.

It is used to find lost tourists in the mountains or under avalanches. It is a pleasant and  calm companion.