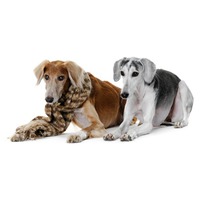 It is a very old breed that descends from the Egyptian Hound. A skeleton of a similar dog was found in Northern Syria that dates back to the year 2500 BC. It was raised by the Arab tribes for fast hunting of gazelles and rabbits. First it was called the Persian Greyish Hound and the name Saluki was given to this dog after the Saluk stronghold. It appeared in Europe for the first time at a canine exhibition in 1909 in England. It became known due to count von Schublember from the German embassy in Teheran, who managed to bring some specimens and to show them at the exhibition organized in 1926 in Amsterdam.

It is a large-sized, brawny, slender and elegant dog. It has a long, narrow head and a not very prominent stop. The muzzle is long and the nose is big, black or dark red. The eyes are dark, egg-shaped, with very long eyelashes which are characteristic for this breed. The ears are very long and mobile. The neck is long, slender and brawny. The back is slightly arched over its brawny loins. The tail is long, set low and carried arched. The fur has straight, silky hair that is longer on the ears, tail and the back side of the legs. There is a variety with short fur in these areas. It can have any colour, with or without white.

It is an intelligent, jolly, dynamic, gentle, sensitive, delicate dog that has a noble and independent character. It is attached and devoted to its master, but cautious and distrustful with strangers, it gets along well with children. Because of its powerful hunting instinct it will hunt almost everything it sees, that's why in some countries it is forbidden to be left free.

This dog's fur needs a casual brushing more intense in the areas with longer hair. The ears must be kept clean.

It feels best in a well-fenced yard where it can move freely. It is recommended to an active person, with experience in raising dogs. In the house it is generally quiet, but outside it likes to run in open spaces or by a bike. One shouldn't forget that once this dog sees something it likes to hunt, it will stop listening to its master. It needs socialization and training.

The training of this dog must be done by a person with experience, because it is not very obedient. With a firm, consistent training, without being hard or severe, good results can be achieved.

It is used for hunting wild animals large or small (gazelles, antelopes), for dog races and also as a watchdog and as a companion dog.