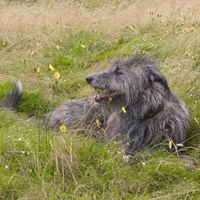 Based on the silhouettes depicting these dogs, found on some carved stones in Scotland, the breed is supposed to be over 2000 years old or more.

It is a large-sized, strong dog, with a broad head, wide and flat between the ears, it has a cone-shaped muzzle, adorned with a moustache and a beard and its nose is black. The eyes are medium- sized, dark or hazel. The ears are set high, small, soft and they are slightly folded back when at rest and raised when in action. It has a long and strong neck. The tail is long, almost touching the ground and kept low when at rest and high in movement. The coat has medium length hair, rough and wiry, slightly longer on the belly, chest and head. The most common color is dark-blue, grey but it can be yellow, light grey, red, brown, or red mixed with white and black. It can have white spots on the chest and paws.

It is an intelligent, brave, gentle, even-tempered  dog that rarely barks. It is affectionate, devoted to its master, gentle with children, mildly alert to strangers. It has a powerful hunting instinct which can cause problems with other animals.

This dog's fur must be brushed regularly, and if needed, it will be trimmed by hand once or twice per year. The excess hair from the ears and from between footpads will be removed.

It feels well in an enclosed yard where it can run freely but it can also adapt in a large house if its daily need of exercise is met. It likes to run in open space or alongsde a bicycle. It has a strong hunting instinct and it might run after game, leaving its master if not controlled. It needs trainig and socializing.

With a consistent, gentle, friendly training, good results can be achieved.

It is used for hunting large wild animals (deer, antelopes) and as a companion dog.