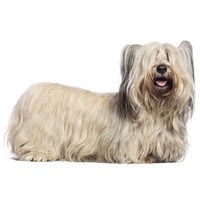 Its name comes from the isle of Skye, the largest island in the Inner Hebrides near the Scotland shore. According to the tale, a Spanish ship shipwrecked near the island and the only survivor was a Maltese dog, which got to the shore and was taken and raised by the natives. After several crossbreedings with the Scottish Terrier and the Dandie Dinmont Terrier the present-day specimens were obtained.

It is a small-sized, short dog, with a body twice as long as its height, but brawny. The head is proportional to the body, strong, with a black nose and covered with a silky forelock falling over its eyes. These are small, round, hazel. The ears are pointed, usually erect and covered by rich and long hair (may have drooping ears). The tail is docked short and carried straight. The fur is double-layered with a fluffy, soft, thick inner layer and an outer layer with long, straight, smooth, silky, glossy, rich hair, which falls on both sides of the body. It can be: black, grey, brown, yellowish, cream, with dark muzzle, ears and tip of the tail.

It is a brave and active dog outdoors, but calm, quiet indoors, intelligent and serious. It is loyal to the family and attached especially to one person. It accepts children, especially if they don't tease it. If they were socialized from an early age, they will have no problems with other animals and with other dogs when they grow up, although some specimens will sometimes have a dominant attitude towards other dogs. It is generally reserved with strangers.

The fur should be brushed, combed weekly, to keep it in good condition. The hair has a parting along the back. Excess hair in the ears and between the footpads should be removed.

This dog can adapt to the outdoor life and also to a flat with a not too active master, but with experience in raising dogs. It needs socialization and training.

The training must be consistent, fair, well-balanced and firm without being cruel or harsh, even allowing some initiative to the dog. It likes long walks in different places (bridges, fields, parks).

In the past, they were used for hunting wild animals (foxes, badgers, otters). Today they are mostly used as pets and as watchdogs.