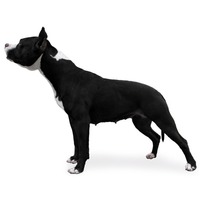 It is the result of the crossbreeding between the Bulldog, smooth hair Fox Terrier and the White English Terrier and was developed for dog fights in the 19th century and was known as the old style Pitt Bull Terrier. After the dog fights were banned the breed started being used as a companion. At the end of the 19th century this dog was brought in the U.S. where it was developed into the American Staffordshire Terrier. It is known in England and USA. It was recognized in 1935.

It is a medium-sized, strong and brawny dog, that inspires power. It has a strong and wide chest. The head is short, the skull is broad and flat. It has a prominent stop, a short, wrinkled forehead and a strong muzzle with a black nose. The eyes are medium-sized, round, almond-shaped and black. The ears are small, semi-erect or erect. It has a thick, powerful neck. The tail is medium-sized, conical and kept low. The fur has short, soft and thick hair. It can have different colors: black, red, light brown, white or blue and any combination that does not include white.

It is an intelligent, brave, tenacious, lively, agile, balanced, calm, energetic and loud dog. It is obedient and devoted to its master and very loving and tolerant with children. In England it is known as the nanny dog because of its innate love for children. It is generally friendly with people. As long as they are socialized with other household animals from an early age they will not have problems when they grow up. No matter how long and hard they are socialized with other dogs they still have aggressive tendencies, especially towards males.

The fur can be brushed occasionally with a rubber brush to remove dead and loose hair.

The Staffordshire Bull Terrier will do okay in an apartment or in a small yard. This dog is recommended for active people that have experience in raising dogs, who have time and are loving and patient. Strong sunlight should be avoided. In the presence of other dogs it is recommended for it to wear a muzzle and should be walked in less populated places.

The training of the dog must be done by a person with experience. It is an intelligent dog that learns quite fast, but sometimes it can be a little stubborn. Therefore training should be firm, consistent, without being harsh or cruel but encouraging and loving. It should be socialized from an early age, with other small domestic animals and other dogs. It likes to run, play with the ball, play fetch. After it gets enough exercise, it will keep calm indoors.

It is used as a watchdog but also as a companion dog.