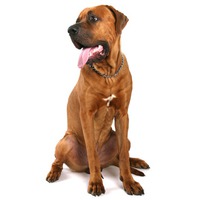 It is a relatively young breed, developed in Japan, beginning with the 19th century and was obtained by crossbreeding the local breed Kochi with European breeds: Bulldog, Saint-Bernard, Bullterrier and the Great Dane, the Tosa taking their main characteristics, especially the courage and fighting strength.

It is a large-sized, strong, well-balanced dog, with an imposing look. It has a big, square head, with a wide muzzle, with thick lips hanging on the sides. The nose is big and black. It can have black spots on its pink tongue. The eyes are small and dark. The ears are medium-sized, triangular, with rounded tips and drooping. The tail is of medium length and conical. The fur has short hair and may be reddish-brown, black, yellow, black with brown stripes. It may have a black mask and white patches on its chest and legs.

It is a very brave, cautious, quiet, sympathetic, patient, smart dog, that doesn't bark for no reason. lt is devoted, protective and affectionate with its master and his family, it gets along well with children, and treats strangers with caution. If socialized from an early age with other small household animals, it accepts them, but has a tendency to dominate other dogs.

This dog's fur is kept beautiful by an occasional brushing, more frequent in the shedding period. This dog doesn't drool.

It is considered by some a dangerous dog, so it is recommended only to people with experience in raising dogs. It feels good in the open, in an enclosed space, large enough for exercise. It requires mandatory training and socialization.

It was used for dog fighting. Today it is used as a watchdog and as a companion dog.