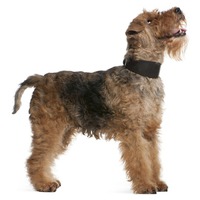 It is one of the oldest pure breeds in this country. The breed was developed more in Wales. It's a direct descendent of the British Black and Tan. After many selections and crossbreeding with the wiry Fox Terrier the present day specimens were obtained. It is widely spread.

It is a small-sized, robust, sturdy, square-looking dog. The head is flat and rectangular with a strong muzzle, double in size compared to the head, with a black nose. The eyes are small, deeply set, wide apart and dark brown. The ears are V-shaped, small, the pointed tips kept towards the front. The tail is short, docked and kept vertical. The fur is double-layered, with a soft and fluffy inner layer and a dense, rough, wiry and very thick outer layer. Generally they are reddish-brown with black. It has long hair on its muzzle, forming whiskers and a beard. It resembles a miniature Airedale Terrier.

It is a intelligent, lively, happy, brave, resistant, vigilant and active dog. Affectionate and loyal to its master, it is cautious around strangers. It is tolerant with children. It finds it difficult to accept smaller household animals if not socialized with them from an early age. It generally accepts other dogs but sometimes can have a dominant attitude.

This dog's fur must be trimmed 2-3 times a year and weekly brushed.

This dog can adapt to life outdoors, in a yard and also to life in an apartment, but having the possibility of exercising daily with an active and experienced master. It requires socializing and training.

Some say that this is the easiest trainable terrier due to its intelligence, its ability to understand what is asked of it and its tolerant character. Nevertheless the training should be consistent, ferm and varied enough to keep the dog interested. It enjoys playing with the ball, running and playing without a leash in a wide open space.

It's an excellent fox, otter and badger hunter (it even gets in the water to hunt). It is a loyal and cheerful companion.