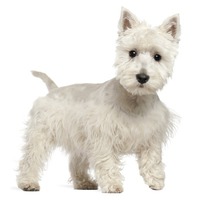 This breed was developed by Colonel Malcolm on his estate - Poltalloch and on the Roseneath estate of the Duke of Argyll. It was created with the purpose of obtaining a white hunting dog that will not be taken for a fox because of its colour. It looks like the Cairn Terrier, the main difference being the colour of the fur.

It is a small-sized, shapely, brawny dog that is tall rather than long. The head is wide compared to its length, it has a pronounced stop, covered with soft hair and a big, black nose. The eyes are medium-sized, round, dark and with thick eyebrows. The ears are small, pointed and erect. The tail is short up to 12-15 cm, pointy at the tip and carried straight, vertically. The fur is double-layered with an outer layer made of rough, straight, long (approximately 5 cm) hair. The fur on the face has a shaggy look and the muzzle gives the head a big and round look. The fur is pure white.

It is an intelligent, daring, curious, confident, brave, lively, playful, alert dog, but it can be stubborn and independent. It is loyal and attached to the family. It is suspicious of strangers, but a good playing partner for children. In general it gets along well with other dogs and other  household animals, but only if it was socialized from an early age, otherwise it can be dominant towards other dogs and small animals from the household can be considered prey (cats) and will be chased.

This dog's fur must be brushed and combed weekly to keep it neat. It must be trimmed 2-3 times a year.

It is a dog that adapts to the offered living conditions - yard or flat, alongside an active master that has experience in raising dogs. It needs socialization, training and exercise.

It is a jolly, playful dog that is slightly stuborn with initiative and should not be let to do what it wants. The training must be firm, consistent, well-balanced, without being harsh or severe. It likes to play with the ball, to run and to dig, because of its high level of activity.

It was used in the past for hunting rabbits, foxes, or as a watchdog for the house, today being used more as a companion.