Malta is a southern European country is the Mediterranean Sea, 80 km (50 miles) south of Sicily, 284 km (176 miles) east of Tunisia and 333 km (207 miles) north of Libya. Malta covers just over 316 square km (122 square miles), making it one of the world’s smallest and most densely populated countries. The capital of Malta is Valletta. There are two official languages: Maltese and English. Malta is a favored tourist destination with its warm climate, numerous recreational areas, architectural and historical monuments, including three UNESCO World Heritage Sites, most prominently the Megalithic Temples which are some of the oldest free-standing structures in the world.

The dog breed that originates in Malta is one of great importance: the Pharaon-Hound or the Kelb tal-fenek is considered one of the oldest domestic dog breeds that there are information about. Based on the some inscription and bas-reliefs that were found in Egyptian tombs, this dog was the favorite of the pharaohs, therefore the name. This dog is thought to have been brought to Malta 2000 years ago by Phoenician merchants and was even declared a national breed, its face being embossed on a coin. 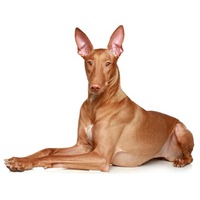