Poland, officially the Republic of Poland, is a country in Central Europe, bordered by Germany to the west, the Czech Republic and Slovakia to the south, Ukraine, Belarus to the east, and the Baltic Sea and Kaliningrad Oblast and Lithuania to the north. The total area of Poland is 312,679 square km (120,726 square miles), making it the 69th largest country in the world and the 9th largest in Europe. With a population of over 38.5 million people, Poland in the 34th most populous country in the world, the sixth most populous member of the European Union, and its most populous post-communist member. Poland is a unitary state made up of 16 voivodeships.

The dog breed that originates in Poland is the Polish Shepherd Lowland. This is a 400 year old breed, a descendent of the Hun and Puli breeds. A few specimens were brought in Scotland in the 16th century and led to the development of the Bobtail and Bearded Collie breeds. 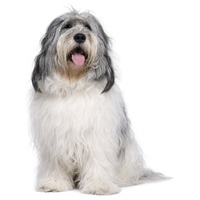