Russia, officially known as the Russian Federation, is a country in northern Eurasia. It is a federal semi-presidential republic, comprising 83 federal subjects. From northwest to southeast, Russia shares land borders with Norway, Finland, Estonia, Latvia, Lithuania, Poland, Belarus, Ukraine, Georgia, Azerbaijan, Kazakhstan, China, Mongolia and North Korea. Russia is the largest country in the world, covering more than one-eighth of the Earth’s inhabited land area. Russia also is the world’s ninth most populous nation with 143 million people as of 2012. Extending across the entirety of northern Asia and much of Eastern Europe, Russia spans nine time zones and incorporates a wide range of environments and landforms.

There are 2 breeds that originate in Russia, breeds that are very different from one another: one is slender and athletic and the other robust and powerful. The slender one is the Borzoi, also known as the Russian Greyhound. This breed was originally used to hunt small game and then it became a very popular racing dog. The second breed is the Caucasian Shepherd, or the Ovcharka (the shepherd’s dog). Although he wouldn’t do very well in a dog race, there is no better guardian for herds or properties. It is a loyal dog that needs to have an occupation, a job, not being well-suited as a companion. 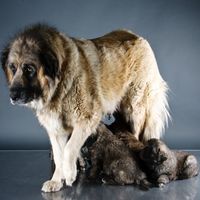