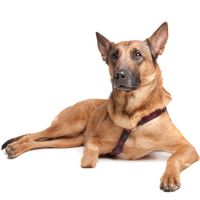 It's of the four Belgian shepherd dogs considered one breed with four varieties in all countries, except the U.S.A, where each variety is considered a separate breed. Its ancestor is the Persian shepherd dog, from which, through many crossbreedings, the present day specimen resulted. In the Middle Ages there were many types of Belgian shepherd dogs. In 1891 a commitee of experts decided that the Belgian shepherd dogs have the same length of the body and the same shape, the difference being the length, texture and colour of the fur. These four types were given the names of the regions where they were developed.

It is a medium-sized dog, with a harmonious, proportional and brawny body, with strong muscles and an elegant look. The head is moderately long, with a muzzle equal in length to the skull and narrower towards the nose. The eyes are almond-shaped, dark brown. The ears are medium-sized, triangular, set high, stiff and errect. The tail is medium-sized, kept low, with the tip slightly bent and has long and rich hair. It has rough, short, bristly, yellow-copper hair, with darker areas towards black around the nose and tail. The length of the hair is approximately 6 cm, evenly on the entire body and has a disheveled look.

It's a rustic dog, used to living in the open, very resistant to weather changes. It is active, dynamic, intelligent, eager to work, jolly and obedient. It is very devoted to its master. Fast in actions, has an impulsive character, immediately responding to any challenge. It is reserved with strangers and has no problem with children if treated right by them. It gets along well with other dogs and other household animals if it was socialized from an early age.

Its fur must be trimmed twice a year, but not too short, otherwise the hair will be ruined for many years. A comb with large teeth must be used for combing. It needs socialization and training.

It is not hard to train because it is an obedient dog that learns pretty fast. It is an independent breed with a strong character and that is why they need training from an early age and getting accustomed to new things, people and animals. They must not be hit and a gentle, but firm tone must be used. Most of these dogs enjoy ball games, swimming, running by a bike and long walks. They are successful in agility contests and flyball.

They were used in the past to guard herds, but today they are used as companion dogs and also for security and as watchdogs.