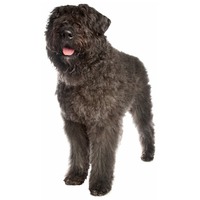 This breed was raised and developed in the Flanders area in Belgium. It was formed by crossing mastiffs with spaniels and sheepdogs. Even though it’s a couple of hundreds years old, it was recognized only in 1910. This breed was improved by Captain Darby of the Belgium army. It is also spread in other states in Europe (France, Italy, Netherlands and Germany) and since 1930 in the United States of America. It was used in the First World War as a messenger or transporter of drugs.

It is a large-sized dog, strong, with a square and stocky body, sustained by vigorous and muscular legs. The eyes are egg-shaped and dark brown. The ears are triangular and can be cropped to stay erect or left natural. The head may seem massive due to the whiskers, beard and the fluffy eyebrows. The tail is almost 10 cm long, kept high or it can be born without a tail. This dog has a double-layered coat, with a delicate and thick inner layer and a rough, bristling, lustreless outer layer, slightly wavy, without being curled. It can have the following colors: fawn, gray, salt and papper or black. Some specimens have a small white patch on the chest.

It is a sensitive, intelligent, well-balanced dog, brave, alert and hard working. Protective and devoted both to the owner and his family, it is suspicious with strangers. If it is socialized with other pets and dogs from an early age it will become sociable. It also gets along well with children.

The brushing of the fur can be done occasionally and more often in the shedding period. The excess hair between the footpads and the ears must be trimmed. If it is kept inside the apartment, its hair can be cut during the hot period.

It is resistant to weather changes, it likes outdoor life but can also get used to living in a flat. It feels good with an active master; it loves doing exercise. It needs socialization, training and exercise.

It needs a well-balanced and consistent training, but not too rough. The commands once learned, will be never forgotten.

In the past it was an excellent herding dog. It can be used by the army or police, to locate and help people caught in avalanches and it is also used as a guide dog for blind people.