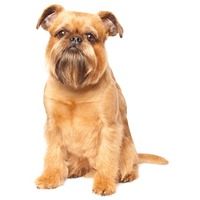 All these three types have the same origin and the same morphological characters and the same uses. They only differ in structure and hair colour. The Griffon is the national dog of Belgium. Its origins are very old. Thus, the painting of 1434 by the flemish painter Jan van Eyck represents a small dog that perfectly resembles the Brussels Griffon. Initially they were used to hunt mice, rats on farms. They got their present shape by crossbreeding with Affenpinscher, Pug and English Toy Spaniel. The addition of genes from the last breed contributed to present-day facial characteristics making them unfit for mouse hunting. Since then, they have been companion dogs.

They are small-sized dogs, with short and strong bodies. They have a large, broad and round skull, a curved forehead, a short muzzle, powerful jaws, a black, short nose placed deep between the eyes. It has big, black, round eyes, prominent and set apart. The ears are semi erect and can be cropped to stay erect. The tail is docked to a third of its natural length and kept low.

The Bruxelles Griffon has rough, medium length, thick, bristling hair, forming beard and whiskers on the face. It can be pink-red, sometimes with black on the nose and beard.

The Belgian Griffon has rough, medium length, thick, bristling hair, forming beard and whiskers on the face. It can be completely black, reddish and black or red.

The Barbacon Dwarf has short hair, no beard or moustache and has the same colours as the other Griffons.

These dogs are calm, eager to learn, lively, jolly, playful, even restless, curious and sociable. They are devoted to their master, affectionate and playful with children, but suspicious of strangers. They get along well with other dogs and other household animals.

The wiry fur of the Griffons should be trimmed by hand regularly, leaving the moustache, beard and the rest of the hair on the face untrimmed. The whiskers and beard should be cleaned of food scraps and kept untangled. Also, it is required to remove the hair from the corner of the eyes, not to irritate them.

They feel well in an apartment or in a house with a loving master. Even if they have a moderate level of activity, they enjoy occasional longer walks and canine sports. They need socialization and training.

With a well-balanced, varied, gentle training the desired results can be obtained, because they are intelligent and eager to learn dogs.

They are pleasant and cheerful companions.