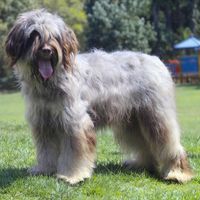 The origin of the breed is to be found in the ancient shepherd dogs brought by the Roman legions to Europe during conquests. At the beginning the breed had the characteristics of the Pyrenean shepherd. Later, at the beginning of the 20th century, the Count of Castro Guimarães from Cascais (the owner of Serra de Aires Mountain in the Alenteo region - hence the name), in his wish to improve the breed, crossbred these local dogs with the Briard, thus getting the Cao da Serra de Aires of today.

It is a medium-sized, rustic, strong, brawny, well-developed dog with an elastic walk. The head is pretty wide, not too long, covered with long, rich hair with a black, rounded nose. The eyes are round, medium-sized, black, set horizontally, covered by the hair on the forehead and eyebrows. They are dark and the eyelids are well-pigmented. It has a lively and intelligent look. It has medium- sized ears, naturally drooping or cropped to stay erect. The tail is placed high, going down to the hock, bushy, with a pointed and curved tip. It is carried low. This dog's fur is very rich, smooth and slightly wavy. It has only one layer. The most frequent colour is black, but you can also find varieties of grey, yellow, brownish with fawn spots. It can have white patches on the chest, but only there.

It is a dynamic, agile, alert, very resistant, intelligent dog that is eager to learn. It is very loyal and loving with its master and his family. They are tolerant with children, cautious and careful with strangers. It gets along well with other dogs and other household animals if it was socialized from an early age. These dogs have tendencies of domination, a well-developed, territorial instinct and can be a bit stubborn.

It needs a casual brushing and combing, so the fur doesn't get tangled; but not too often, not to ruin the aspect of the fur. A comb with rare teeth should be used. Excess hair between the footpads should be removed. A small amount of shampoo should be used while bathing the dog.

It is not a pretentious dog. It is very resistant to weather changes. It is a dog with a high level of energy and needs a lot of activity. It feels best in an enclosed yard, in a wide open space, it adapts with difficulty to living in a flat, preferring life in the open. It needs a lot of daily exercise, socialization and training. It does well in agility competitions, flyball.

It needs a firm and consistent training, done by a person with a lot of patience, without a severe attitude, otherwise the wanted results won't be obtained. Being a stubborn and independent dog it needs a master with a strong character.

It is widely used as a watchdog for houses and properties, for herding flocks but also as a companion dog. It is also used for tracking.