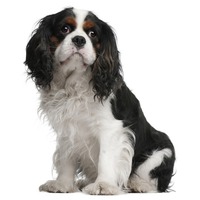 It's a variety of the King Charles Spaniel, from which it differs by the honorary name of "Cavalier" and the longer muzzle. It has been raised as a pet and for hunting small animals since the 16th century. King Charles II of England (Charles II Stuart) loved the companionship of these Spaniels' that today bear his name. After selective crossbreedings, the muzzle of these Spaniels became very short. In 1926 the American Roswell Eldridge offered important awards in five successive editions of the contest Crufts Dog Show to encourage the return on the scene of the Spaniels with a long muzzle that could be seen in old paintings. This spaniel was named Cavalier King Charles and became more popular than its relative, especially in England, but also in the U.S.A.

It is a small-sized, well-balanced, well-built and graceful dog. The head is relatively flat between the ears, with a not too prominent stop, a conical muzzle and a black nose with large nostrils. The eyes are big, round, spaced and are dark. The ears are set high, very long, drooping and covered with rich fringes. The tail is quite long, kept low, well covered in fur and can be docked at 2/3 of its length. The fur is of medium length, with silky, straight or a bit wavy hair, with rich fringes on the ears, tail and the back side of the legs. It can be white with brown patches (Bleiheim), black, reddish, black with fawn, or tricoloured (black, white and fawn).

It is an active, lively, gentle, intelligent, sociable and friendly dog. It is obedient and devoted to its owner, friendly with children, it gets along well with other animals and other dogs.

The fur should be brushed regularly to avoid getting tangled and to remove dead hair. The ears will be kept clean. They are a little greedy with food and are predisposed to obesity.

It is a dog that can easily adapt to any living conditions and lifestyle offered by its master. It has a low level of activity and will be satisfied with short walks, but it will not refuse a longer walk. It needs socialization and training.

It is a dog that understands pretty easily what is required and is eager to learn, therefore is not hard to train. With a consistent, gentle training the wanted results can be achieved.

It is a pleasant companion dog.