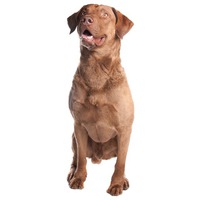 The origin of this dog was traced back to two cubs of Newfoundland, found in the wreck of a ship in 1807, in Chesapeake Bay, on the coast of Maryland. These were crossbred with local Retrievers and later with the Irish Water Spaniel and the Otterhound, thus resulting the specimens of today. This dog was created to fetch prey, especially wild ducks, near water or in water.

It is a medium- to large-sized, powerful dog, long rather than tall. The skull is wide, round, the same length as the muzzle, narrow, but not pointed, with a not too big, dark brown nose. The eyes are rather big, set apart and yellow. The ears are small, placed high, round-ended and drooping. The tail is of medium length, slightly bent, carried high but not on the back, covered with long hair, forming fringes. The paws have an interdigital membrane and the hind legs are strong and brawny, helping the dog swim. The fur is double-layered, with a thick, fluffy inner layer and an outer layer made of thick, short, oily, even waterproof hair, slightly wavy on the shoulders, neck and back. The colour is between yellow-brown and dark brown, the most frequent colours being of darker shades.

The fur will be carefully brushed, to remove dead hair during the shedding period, but not intensely, to avoid damaging the texture of the coat. For the same reason, bathing is not recommended.

It is a dog with a rather high level of activity, which likes to do a lot of exercise and to keep busy, otherwise it gets bored and starts causing damage. It is a dog which is recommended to active people, experienced in raising dogs, who can take time each day to tend to the dog, because it likes canine sports, to play fetch, to swim. It is a dog resistant to weather changes, which feels good in a fenced yard where it can move freely. It needs training and socialization from an early age.

The training of this dog should be done under the guidance of an experienced person, because it has the tendency to be independent, to do whatever it wants. But, with a firm, consistent, but mild and indulgent attitude, rather good results can be obtained in a short time. These dogs reach maturity later than other dogs.

It is an excellent retriever in bird hunting, especially in water. It is also a lovely companion. 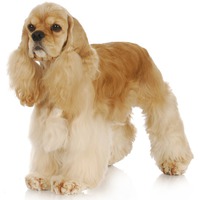 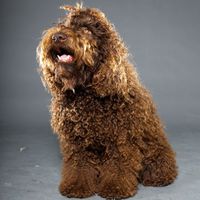 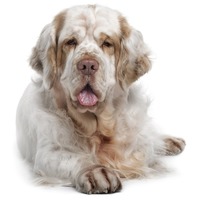