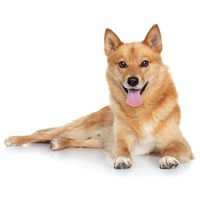 It is Finland's national breed where it was and still is used for hunting birds, especially the grouse. It hunts like a Pointer, chasing birds from their nest, emitting a series of sounds, fast, distinct yelps (up to 160 of such sounds per minute) to call its master. It descends from Mastiff dogs brought into the country on several occasions and after several selections, a pure breed was obtained at the end of the 19th century.

It is a medium-sized dog, similar to a fox, with a square body. The head is medium-sized, with a slightly arched forehead. It has a pronounced stop, with a conical muzzle and a big, black nose. The eyes are medium-sized, almond-shaped, dark. The ears are small, pointed, erect and mobile. The fur is double-layered with a thick, fluffy, short inner layer that is light-coloured and a outer layer made of rough, semi-erect or erect hair, of a reddish-gold colour with or without white patches on the toes and chest. The tail is long and bushy and is carried on the back. The fur on the chest and shoulders is thicker forming a mane.

It is a dynamic, lively, curious, intelligent, independent and brave dog. It has a very fine hearing. It is devoted to its master and sociable with guests, but cautious with strangers, who are barked on arrival. It loves children and has patience with them. It has no problems with other dogs, it even feels better next to other dogs, rather than alone.

A casual brushing should do the trick, because the fur pretty much cleans itself.

It is a dog resistant to bad weather. This dog loves outdoor life, with an active master. It needs a lot of exercise, socialization and training.

It is an independent dog that does not always carry out the commands and that's why it is more difficult to train, but with patience, consistency and perseverance, an acceptable level of training can be achieved.

It is used for hunting in the Northern countries, but also as a pet when daily exercise can be ensured.