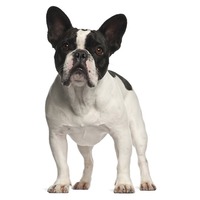 It is a breed over 100 years old. Its current shapes was reached in the early 20th century. It was developed as a companion breed from the miniature English Bulldog, which the British workers seeking work brought with them to France in the middle of the 19th century. Here, through various crossbreedings with other local breeds they have achieved their present form. Over time the French Bulldog became fashionable in Paris, then worldwide and especially in North America.

It is a relatively small, strong dog, with a heavy body, long rather than wide, with a broad and prominent chest and short, spaced legs, especially the front ones. The head is broad, square- shaped, almost flat. The forehead is rather curved, with a fold between the eyebrows. It has a broad, short and flat, black nose. It has wide and very powerful jaws. The eyes are big, round, somewhat prominent and set apart. The batlike ears are medium-sized, erect and round-ended. The tail is short, conical, straight or corkscrew. The coat has short, thin, soft, glossy and dense hair. The coat colors include reddish mixed with white and black streaks, but fawn and white with stripes are the most common combination.

It is an intelligent, very brave, active, disciplined, cheerful, sensitive, and sometimes stubborn dog. It is very affectionate and devoted to its master, it gets attached especially to one person in particular, is loving and tolerant with children. Even if it is vigilant and barks at strangers, it then becomes friendly. If it is socialized from an early age with other animals and other dogs there will be no problems when it grows up. Sometimes it can become jealous if the owner gives more attention to someone else.

This dog's fur must be brushed occassionally with a rubber brush. The folds on the face must be kept clean not to get infected. The ears must also be kept clean. It must be protected from strong sunlight.

It is a dog that feels good in a house or an apartment with a caring and loving master. It likes to be part of the family and hates to be left alone too long. It has a low level of activity so short walks are enough for it. Nevertheless. it likes to run, to play, to accompany its master everywhere. It needs socialization and training.

It is an intelligent dog that understands easily what is asked of it, it is sensitive to the tone of the voice and that's why with a gentle, but consistent training the desired results can be achieved.

It is a devoted and loving companion.