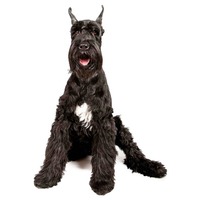 The original dog of this breed is the Standard Schnauzer. It is the result of the crossbreeding between the medium-sized Schnauzer, Great Dane and Bouvier des Flanders.

It is a large-sized, strong, well-balanced dog, with an imposing look, which inspires respect. It looks a lot like the standard Schnauzer, the only difference being that it is bigger. It has a rectangular, strong head, with the muzzle equal in length to the skull. The nose is round and black. The eyes are medium-sized, egg-shaped and dark. The ears are medium-sized, V-shaped, drooping at birth and can be cropped to stay erect. It has bushy eyebrows and the characteristic moustache and beard. The tail is docked short and carried high when alert and horizontally at rest. The fur is double-layered, with an outer layer with rough, bushy hair that can be black, salt and pepper, steel-grey to silver-grey.

It is a very brave, intelligent, calm, hard-working, rather aggressive dog, with an impressive physical endurance. It is protective, devoted, gentle and playful with the family, but can become slightly aggressive if challenged. It gets attached to its master and doesn't stray too far from him. They are mostly tolerant with children. If it was well socialized from an early age, it can accept other dogs and other household animals, otherwise problems can appear.

Because the Giant Schnauzer doesn't shed, this dog's fur must be trimmed 2-3 times/year. The excess hair in its ears and between the footpads must be removed. The beard and eyebrows must be combed frequently, not to get tangled and not to get in its eyes.

It is a dog resistent to weather changes, which likes life in the open, with an active master, with experience in rising dogs. It needs training, socialization and exercise.

It needs a correct, consistent and varied training, done by a skilled person. It must be socialized from an early age with children, other animals and other dogs. It loves exercise and feels the need of activity.

It was created at first to herd cattle and as a watchdog for farms. It was used in the First World War by the army. It is an excellent watchdog of farms and horse stables, because it gets along very well with these animals, also of houses. It's a devoted companion. It is used by the army and police because it performs any task willingly.