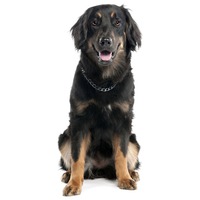 Its name comes from the expression used in the Middle Ages: "Hofwarth" which means guardian of the household. It is supposed to have the same origin as the Hungarian shepherd Kuvacs and the Swiss shepherd dog. The paintings of the 11th and 12th century show dogs with a similar appearance to the present-day Hovawart. At the beginning of the 20th century it almost disappeared, but several fans of this breed decided to revitalize it, so that today's breed is a modern breed rather than a descendant of an ancient line. It's not very well known.

It is a large-sized, strong dog, with a robust build. The head is medium-sized, with the muzzle equal in length to the skull and with a wide, rounded forehead. The eyes are medium-sized and dark. The ears are triangular with pointed tips and drooping. The tail is bushy and long, but without touching the ground. The fur is double-layered, with an outer layer made of soft, glossy, slightly wavy,  medium length hair, longer on the neck and tail. It can be black, black with a patch, black with yellow to golden, with a white patch on the chest and the tip of the tail.

It is a brave and watchful dog with a very good sense of smell, well balanced and playful. It is gentle, affectionate, loyal to the family and attached especially to one person. Playful and patient with children, it is reserved with strangers and accepts them only with the master's approval. It accepts other animals and other dogs, even treating them with indifference if it was socialized from an early age.

This dog's fur doesn't require too much grooming. It must be brushed when it gets tangled and more often during the shedding period.

It is an active dog, who likes exercise, outdoor activity but that can also adapt to a flat, if it has the possibility of intense daily exercise. It needs socialization and training.

It is an easy to train dog, because it is intelligent and obedient. A well-balanced, consistent training, done on a gentle but firm tone, will ensure very good results.

Having a heightened sense of smell, it is very good at tracking and seeking in avalanches. It is also a very good dog for guarding, protection and company.