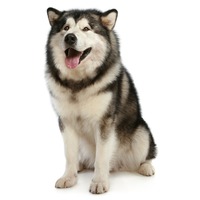 This breed was developed by the Chukchi tribe in north-east Asia (Siberia) and due to the area being isolated, the breed remained pure until the begining of the 20th century when it was introduced into North America. These dogs became known and appreciated even more in 1925 when they pulled a sleigh with drugs against diphtheria in Nome, a snowed-in, isolated town. It is the most famous sled dog.

It is a medium-sized dog, with a brawny, rectangular-shaped and strong body. The head is slightly rounded, with a prominent stop, a conical muzzle equal in lenght to the skull. The colour of the nose can be black, red or red with pink patches. The eyes are almond-shaped, slightly slanting and can be hazel, blue or different colours. The ears are medium-sized, triangular, with pointed tips and erect. The tail is long, well covered in fur, kept low at rest and high on the back when alert. The fur is double layered, with a thick, fluffy inner layer and and outer layer with medium-lenght hair, thick that can have any color, from white to black with a variety of white and black marks.

It is a dynamic dog, it likes to wander independently, it is lively, active, friendly with everybody (not a good guard dog), attached to its master and family. It has no problems with children. It gets along well with other dogs and it accepts other household animals only if it was socialized with them from an early age.

The fur requires a more frequent brushing during the shedding period otherwise it can be done ocassionally.

This dog feels great outdoors, in a colder climate, with an active, sporty master. It likes to get a lot of exercise and to roam, that's why the yard must be well enclosed to prevent it from leaving. It doesn't hassle with other dogs, so it's a suitable breed if several specimens are involved. It needs socialization and training.

It is an independent dog, accustomed to the sled and it is harder to convince to follow  orders, especially if it doesn't understand them. It's recommended that the training of this dog be done by a person with experience and be consistent. It needs to be socialized from an early age with other household animals.

It is used in the northern areas for pulling sleds and as a companion dog.