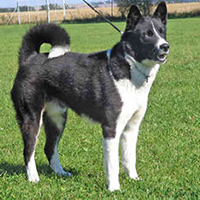 It descends from the Northern native breeds and was raised and developed for hunting bears and elks. After World War II, they almost disappeared but the fans of this breed made efforts to revitalize it.

It is relatively large-sized, strong, brawny dog, long rather than tall. The head is triangular and proportional to the body. It has a conical, short and thick muzzle and a big, black nose. The eyes are small, light hazel. The ears are medium-sized, with slightly rounded tips, triangular and erect. The tail is of medium length and carried on the back. The fur is double-layered, with a short, fluffy, thick inner layer and an outer layer made of rough, thick, straight, medium length hair, longer on the neck, back and bottom. It is black with white.

It is a very brave, intelligent, dominant and independent ( it hunts alone, not in pack) dog, with an excellent sense of smell and with strong hunting instincs and that likes to wander. It is devoted to its family. Generally it is friendly with people (it isn't recommended for guarding); strangers will be announced by barking, but without being aggressive. It is dominant with other dogs. If it is socialized from an early age it will accept other household animals.

This dog's fur doesn't need too much grooming. An occasional combing in order to remove dead hair should do the trick. Like the other small Northern dogs this breed doesn't have the specific odour of a dog.

It is a dog resistant to weather changes. It feels best outdoors, in a colder climate, with an experienced and active master. It likes exercises and to wander off chasing prey. If kept outdoors, the yard must be well-fenced to prevent it from leaving, but having the possibility of exercising (if it doesn't have something to do, it will start causing household damage). It needs socialization and training.

It must be trained by a person with experience because it is an independent dog and doesn't always listen to commands. The training must be firm, consistent, well-balanced, without being harsh or severe.

In the Northern countries it is used for hunting large animals and these dogs were even used to protect suburban areas, which are visited by bears.