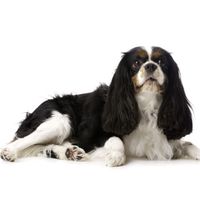 This breed's ancestors may have come from China or Japan, but the breed has been known in England and Scotland since the 16th century. It was raised as a companion dog and for hunting small animals. King Charles the II of England (Charles II Stuart) very much loved the company of these spaniels, which bear his name. It seems that Queen Mary of Scotland had such a dog next to her when she was beheaded. After selective crossbreedings, the spaniel's muzzle became very short. There are four colour varieties that were considered separate breeds until the 20th century.

It is a small-sized, vigorous dog, with a compact body and a square look. The head is round, the skull is curved, the muzzle short, square, upturned, with a short, black, flat, nose and a deep stop. The eyes are big, round, slightly prominent, set apart and dark. The ears are placed low, very long drooping and covered with rich fringes. The tail is pretty long, well-covered with fringes and carried hanging. The fur has medium length, silky, straight or slightly wavy hair. It has rich fringes on its ears, tail and legs. There are four colour varieties, each of them having a different name: Bleiheim (white with reddish-chesnut patches), Ruby (red-chestnut), Prince Charles (tricoloured - white, black and reddish-brown) and King Charles (black with fawn patches).

It is a gentle dog, eager for attention from the family, bashful, playful, clever and not too noisy. It is affectionate, obedient and devoted to its master and his family, it is playful with children, it has no problem with other dogs and other household animals.

This dog's fur must be brushed regularly, twice a week, especially in the places where it usually gets tangled (chest, behind the ears, between the footpads), removing dead hair. The ears must be kept clean and the wrinkles on the face should be cleaned with a special solution.

It is a dog which adapts easily to the offered living conditions and the life style of its master. It has a low level of activity and is content with short walks. It needs training and socialization.

With a consistent, gentle, affectionate training, one can obtain the desired results, because it is intelligent enough to understand what is required of it and is eager to learn.

It is a lovely companion dog.