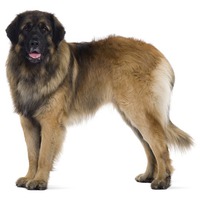 This breed was developed in the 19th century in Leonberg, where from its name derives. It was developed by crossbreeding the Newfoundland, Saint Bernard and the Great Pyreneess, in order to obtain a large-sized dog that resembles a lion, the symbol of the city (león = lion, Berg = mountain). After the First World War, this breed almost disappeard, but it was revitalized by fans. The official standard was established in 1949.

It is a large-sized dog, muscular with a harmonious look and elegant movements. The head is strong, wide rather than long, with a medium-sized muzzle and a black nose. The ears are medium-sized, drooping, covered with hair that is longer than on the head, forming fringes. The tail is long reaching the hock, with long, thick and bushy hair. The double coat of this dog has thick, soft or rough, slightly wavy outer coat that is longer on the neck and chest forming a mane. The colours varies from golden-yellow to reddish-brown with a black mask. Its hair can have black tips and small, white patches on the chest and toes.

It is a lively, intelligent, well-balanced and peaceful dog. It is affectionate, loyal to its master, playful and good with children. It accepts other dogs and other household animals. The arrival of strangers is announced by barking and then they are treated indifferently.

This dog's fur does not require special care. It should be brushed more frequently during the shedding period. Being a dog that grows fast, too much physical exercise is not recommended during the growing period, in order to avoid potential problems with the bones, joints and muscles.

This dog is resistant to bad weather and it feels great outdoors, in a space suitable for exercise, with a loving family. It needs socialization and training.

This dog is easily trained because it is intelligent, obedient and quickly understands what it has to do. It requires a lot of exercise and long daily walks. The training must be well-balanced, gentle and consistent.

It is raised for guarding large properties, houses. It can also be used in case of avalanches. It is a family dog and a lovely companion.