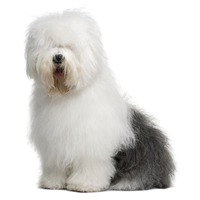 It is the oldest English dog whose origin is not exactly established. It is assumed that it has the same origin as the Briard Sheepdog, namely the Persian sheepdog, developed along the years. It got the name of Bobtail because it was born with a short tail. In the past its owners would dock its tail, to avoid paying the tax on luxury dogs.

It is a large-sized, strong dog, with a rather short body and a square look, thickset and robust. The head is big and rather square, with a muzzle equal in length to the skull and with prominent arches. The eyes have various colours (brown, blue or a combination of these two colours) and they can’t be seen through the thick hair. The ears are medium-sized, round-ended and drooping. The tail is short, it can be docked, or the dog can be born without a tail. The fur is double-layered, with a thick, waterproof inner layer. The outer layer is long, thick, rough, covering the whole body including the legs and can be any shade of grey with or without white patches.

It is an intelligent, jolly, active dog, it is easily adaptable, friendly almost with everybody including children, strangers or animals. It is not too noisy, it likes to be part of a family and it is devoted to its owner.

It needs constant care. The brushing of the fur begins from an early age and is done frequently (weekly), intensely especially during the shedding period when it loses a lot of hair. This represents an inconvenience for those who wish to keep it indoors even though it is a good and peaceful companion. Excess hair between the footpads and in the ears must be removed.

It is resistant to bad weather. It doesn’t require an owner with too much experience in raising dogs because it doesn’t have a dominant character. It has a moderate level of activity, it doesn’t need consistent exercise.

It is not hard to train because it is obedient and eager to please its master. A gentle and consistent training can be done.

It is a good watchdog for herds and houses. It is a good companion dog, enjoying playing with children.