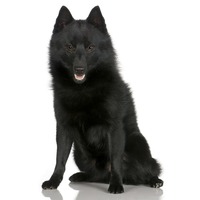 This dog is the result of the crossbreeding between the Belgian Sheepdog Leuvennar (now extinct) and the Spitz Wolf: Keeshhound. It was first mentioned in 1690, when it participated in a contest organized in Brussells for manufacturing of refined copper collars, collar that it wears today according to tradition. It was also called the Spitz of navigators, being used to catch rats on barges and ships and to guard them.

It is a medium-sized dog, with a wolf-like appearance, it has a short, harmonious body that is bigger in front then in the back. The head is slightly narrower at the level of the eyes, the skull is round, the forehead is wide, it has a sharp and not to long muzzle and the nose is small and black. The eyes are small, egg-shaped and dark brown. The ears are small, triangular, set high and erect. It doesn't have a tail and if a stump appears, it will be docked. It has a double-layered fur with a thick and soft inner layer and a rough and thick outer layer. The fur on the hind legs and neck is longer than on the rest of the body forming a kind of collar. On the head and on the front legs, the fur is shorter than on the body. The colour of the fur is pure black.

This dog is jolly, brave, curious by nature, daring and sure of itself. It barks at the first sign of danger, it is diligent, intelligent and eager to learn. It hardly accepts strangers and other animals. It is devoted to its master and gets along well with children.

The fur needs little care, a casual brushing should do the trick.

It is a dog that easily adapts to outdoor life and to life in a flat. It feels the need to do lots of exercise and to run daily. It needs socialization and training.

It can be easily trained because it is a smart dog that wants to make its master happy. It loudly barks at any movement and that is why it must be taught when it needs to bark more or less.

It is an excellent watchdog for the house. It is used to destroy harmful animals (rodents), to catch rabbits, moles. It is also used as a pet.