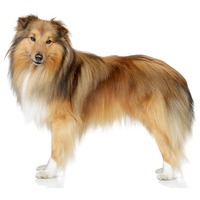 It gets its name from the Shetland area in the NV of Scotland, where they were raised being the result of the crossbreeding between the Scottish Border Collie and the dogs brought from Greenland by whale hunters. Other later crossbreedings with the Spitz dogs determined the small size of these dogs. Although the fur looks like the Collie's, making it resemble a miniature Collie, it doesn't have its characteristics.

It is a small to medium-sized dog, with a slightly long and brawny body. The head is narrow, well-shaped, with the skull equal in length to the muzzle and a black nose. The eyes are medium-sized, slanting, almond-shaped and dark brown or blue in the dogs with grey fur. The ears are small, placed high and folded forward. The tail is long, with rich hair, carried low and with a bent tip. The fur is double-layered with a thick, rough, long outer layer, that forms a mane and collar on the chest, and the inner layer is fluffy, soft and close to the body. The colours of the fur are usually a combination of many colours: intense black, reddish and grey, grey-blue with white patches or cream-coloured on the chest, paws and tip of the tail (but not more than 50%).

It is an intelligent, jolly, obedient, cute and hardworking dog. It is obedient and devoted to its master, affectionate and playful with everyone in the house, including other household animals. It doesn't have a problem with children but it doesn't like being annoyed by them. It's careful and cautious with strangers.

The grooming of this dog is not very difficult, the brushing and combing will be done occasionally and more often during the shedding period. In some areas of the body (back of the ears, on the hind legs) tows can form which need combing.

It is a dog resistant to weather changes, which loves exercise in the open and is eager to get involved in different activities and even a work addict. It needs socialization, training and exercise.

It can be easily trained because it is eager to learn, much more than other breeds. Eager for activity and hardworking it can achieve performances in many canine sports.

It is used as a watchdog for sheep flocks and houses but also as a companion dog.