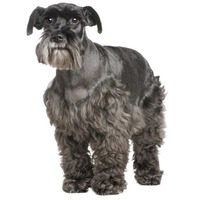 This breed led to the development of the other two breeds different in size: the Miniature and Giant Schnauzer. It is a several hundred year old breed and its ancestors are the Biber dog in the Middle Ages and the old shepherd dogs from Germany. Its name means "mustached muzzle".

It is a medium-sized, well-built, robust and square-shaped dog. It has a rectangular head, the muzzle is equal in length to the skull and has a round and black nose. The eyes are medium-sized, egg-shaped and dark. The ears are V-shaped and are folded close to the head and can be cropped to stay erect. It has bushy eyebrows, a moustache and a beard, characteristic of these breed. The tail is docked short and kept high. The fur is double-layered, with the outer layer made of short, rough and thick hair. It can be black, iron-grey, silvery-grey or salt and pepper-coloured.

It is an intelligent, lively, playful, dynamic, brave, tenacious and ambitious dog. It is very attached to the family but it is suspicious of and doubtful with strangers. Tolerant with children, it naturally gets along well with other dogs and other pets.

The Standard Schnauzer doesn't shed but the fur must be trimmed at least 2 times a year. Excess hair grown in the ears or between the footpads will be removed. The eyebrows and the beard will be combed frequently, not to get tangled and to avoid it getting in its eyes.

It is a dog resistant to weather changes that likes exercise and outdoor life, with an active family, but it can also adapt to a flat if it has the possibility of getting enough daily exercise. It needs socialization, training and exercise.

It needs a firm training, but without being harsh and done in a calm voice. It learns pretty fast, but sometimes it is stubborn. Even if it has a medium level of activity, it likes walks, exercise and to be kept busy. It loves to run beside a bicycle, in a forest, to swim, to play, to participate in agility and flyball contests.

It was originally raised as a watchdog and to catch rodents but also for company. Farmers used it with confidence for different activities such as pulling carts and guarding beer carriages. It is an excellent watchdog for the house and a good and devoted companion dog. Having a well-developed sense of smell it is also used by the police.